Program: “Fantasies and Landscapes: Schumann and our contemporaries” by Ieva Jokubaviciute 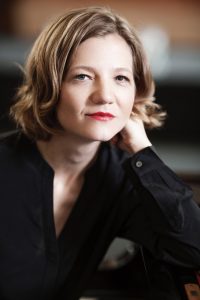 “Fantasies and Landscapes: Schumann and our contemporaries”

Lithuanian pianist Ieva Jokubaviciute’s intricately crafted performances have led critics to describe her as possessing ‘razor-sharp intelligence and wit’ (The Washington Post) and as ‘an artist of commanding technique, refined temperament and persuasive insight’ (The New York Times). In 2006, she was honored as a recipient of a Borletti-Buitoni Trust Fellowship.

Ieva’s debut recording (Labor Records) was released in 2010 to international acclaim, resulting in recitals in New York, Chicago, Philadelphia, Baltimore, Washington, Vilnius, and Toulouse.   She released Returning Paths: solo piano works by Janacek and Suk in 2014. She has performed concerti with the Chicago Symphony Orchestra, the American Youth Philharmonic, and with orchestras in Rio de Janeiro, Brazil and in Montevideo, Uruguay. Her piano trio—Trio Cavatina—won the 2009 Naumburg International Chamber Music Competition and toured nationally from 2005-2015. In the fall of 2016, Ieva began a collaboration with the violinist Midori, with recitals in Columbia, Peru, Mexico, Japan, Canada, and throughout Europe.

Earning degrees from the Curtis Institute of Music and from Mannes College of Music, her principal teachers have been Seymour Lipkin and Richard Goode. In the fall of 2015, Ieva began her tenure as Assistant Professor, Piano at Shenandoah Conservatory in Winchester, VA.