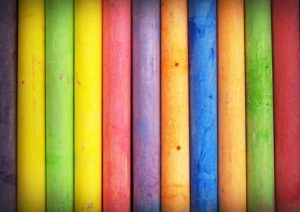 Emily has been taking piano lessons for a while now. Today in her lesson a light bulb went on in her head. We were both so surprised, excited, and happy to experience her nearly effortless playing of the next four measures in her piece which she seemingly was reluctant to try. Music is a language of association in that there is a natural instinct to associate the letter of each key on the piano with the letter of the line or space on the staff in order to understand the entire process. This is a normal organizational skill needed to read and play music. The natural and very normal way a student reads music is to see that the note is on the B line on the staff and then look down to find the B key on the piano in order to make sure it is the correct key. Yes, B matches B, but adding that laborious step (which takes unnecessary time) causes a delay in the beat. Not only is music a language of association, it also must follow a beat that can not be ignored or altered unless the composer gives permission.

The issue with that phenomenon is a problem I’ve often had to deal when teaching. A common dialogue goes something like: “Why do you think you are looking down at the keys?” “To see if I’m playing the correct key”. Instead of allowing the fingers to play the keys all by themselves, the eyes are unnecessarily assisting and interrupting that action.

My first approach in having the student resist the natural urge of looking down is by having a discussion about crossing the street with your eyes closed, which could be disastrous if you step in a pot hole or trip over some debris. Walking into a car at a stop light would be pretty bad as well. The realization after that quick discussion is that the legs can manage walking just fine, but if the eyes aren’t looking at what they need to see (the path ahead), disaster surely follows. Eyes and legs each function separately in order to get one job done successfully and safely. It’s inefficient and unnecessary to assign another task to the eyes that already have enough to do.

Reading and playing music works in a similar way. If we look down at the keys instead of looking at the notes on the page, we can’t play on time unless of course the piece is thoroughly memorized. Not playing the notes on time is counterproductive, as is falling down without a reason. Even though tripping and falling while crossing the street is way worse than delaying the musical beat, both mishaps can and should be prevented. While both activities involve the eyes seeing and the body moving, the brain actually manages their individual functionalities. Teachers and parents resort to covering the students hands to prevent looking down. While these tactics are a temporary fix, what is needed most is to install in the brain the intrinsic desire to do what works best. What works best is and always will be what produces the most satisfying result of playing music successfully.

The student must know why they can’t look at the keys. Just being obedient isn’t usually enough of a reason to stop. This process needs to be taught, not just assumed by the teacher that it is already understood. The student is taught that it takes a moment for the eyes to see the note on the page followed by a second moment sending that information to the brain, and then followed by a third moment sending the information to the fingers. The sum of those three minuscule moments is an event that takes time and must take place prior to the next event of actually playing the keys.

This next multitasking step is CRUCIAL and when left out causes a delay in the beat: the actual event of playing the keys happens while the eyes are already checking out the next notes on the page. It is equally important to teach that a note on a page and a key on the piano are entirely two separate things. A note is information that when seen requires an understanding to develop in the brain. A key requires movement from only the fingers (not the eyes) in order to go down and produce a sound.

While reading music involves both the eyes and the fingers, it’s actually the interval (the distance between two keys on the piano, or the distance between lines and spaces on the staff) that governs the entire process. The eye and brain determine the interval, then send that information to the fingers. Without the process done in that manner, it’s likely that the eyes will look down to see what key matches up with that particular line or space.

In reading intervallically, the eyes determine the distance between the notes on the line or space in the staff, and the brain tells the fingers whether those notes are a second, third, fourth, or a fifth. (It’s best to teach sixths, sevenths and octaves separately. I’ll write another blog for those). The fingers then move from key to key by knowing what each interval feels like in the hand. One way to teach this is to tell the student to place their thumb on any white key while ‘looking’ at the ceiling with their eyes closed. Doing that actually serves a dual purpose (seeing with imagery in the mind, and proving to themselves that the fingers can indeed feel the interval without the eyes guiding them). Then say “play your thumb. Now play finger two. You just played a second because there was a total distance of two keys between the thumb and finger two. You did that without looking down!” Have the student look down and play the second again, then one more time while ‘looking’ at the ceiling with their eyes closed. Ask the student “can you see your fingers moving with your eyes closed? That’s called imagery and is just one of many things our brain can do. Did you notice that you did not need to see what letter the key was? This is why we don’t need to look down when reading music.” Before testing out that theory out with all the other intervals, have the student place two notes on a line and the next space on the staff that is set up on the puzzle mat. This is just one instance when my Piano Bench kit is invaluable. (Setting up the staff and keys is outlined on page 56 of Book 1). To reinforce the idea of the interval of a second, have the student place a yellow interval square on any key. (Each interval square has a number on one side and is just the plain color on the other side. Interval squares are introduced on page 26 of Piano Keys Book 1, and are also used for white key recognition). Then have the student place a blue interval square with the number 2 on top of the key next to the yellow one. Do this in four different places on the keys.