Young Artists Musicales (YAM) are presented in conjunction with Jeffrey Siegel’s Keyboard Conversations performances at George Mason University Center for the Arts. The YAM series features students selected by the Liaison Committee from NVMTA keyboard events. In making these selections, the committee considers not only the artistry of a particular performance but also whether a piece fits the time limitations and repertoire needs of the YAM series.

In the early 2000’s, Alice Heyer, a former member of NVMTA, attended the Keyboard Conversations recitals. As she saw people in the lobby before the recitals, she started to think of ways to get more students to attend these events and to raise awareness in them and their parents about these unique presentations with performance and discussion. Alice also wanted to raise awareness of the Center for the Arts and the GMU School of Music in the whole Metro D.C. Area. Originally, she thought Mason music students might be interested in performing prior to the concerts, and doing so in the lobby of the Center for the Arts. As good as the idea was, though, there wasn’t enough interest to get such a series started. Alice then approached Tom Reynolds, GMU Director for the Center for the Arts, about the possibility of having NVMTA students perform before the recitals. Mr. Reynolds approached Jeffrey Siegel, and when he approved of the idea. Mr. Siegel was the one who suggested the name Young Artists Musicale. Alice and NVMTA member Amy Rothstein then coordinated with Mr. Reynolds and his assistant to organize the event. GMU would be responsible for printing programs, chair set-up in the lobby, and having the piano tuned. Students would be brought backstage to meet with Mr. Siegel after the YAM. Complimentary tickets would be provided to the performing students and their parents.

Now the event has become very popular with people who attend the Keyboard Conversations recitals. They make sure to come early enough to get a seat for the YAM and marvel at the level of artistry exhibited by all performers they hear.

The next Young Artists Musicale is this Sunday, April 28 2019. Tickets can be purchased here. 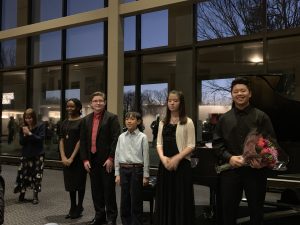 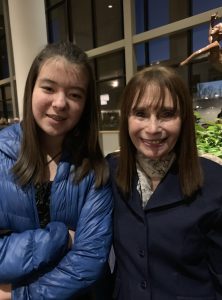